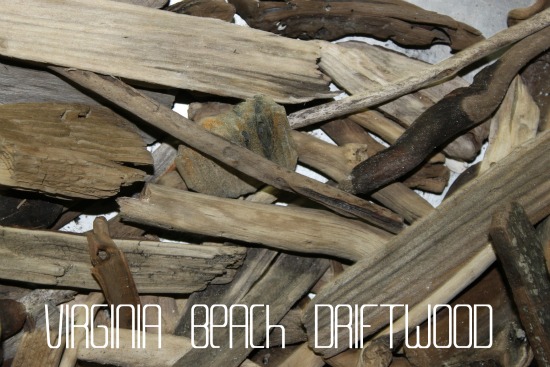 I have to start from the beginning of the story here. When I was in Virginia a bit ago, I stayed right on the beach. While it certainly wasn't balmy beach weather it was warm and dry enough most days to take a nice long walk on the beach. There were few people on the beach in the somewhat remote area where I stayed.

It's impossible for me to walk a beach and not pick up a shell or two. But after looking at $30 driftwood garlands at online stores for the past few months I absolutely could not resist picking up the driftwood on the beach and the thought of making my own garland. My first hurdle was overcoming The Man's concerns about the nuttiness of picking up junky little bits of wood and even more insane packing a large bag of them home in my suitcase.

I don't think he will ever really get it and that's okay. I've learned men and women are just different and there's no getting around it. I'm laughing as I say this remembering his face looking at me like I couldn't possibly make less sense as I tried to explain what I was going to do with all this driftwood.

Luckily he's not here for the garland construction portion of this activity so there will be no further questions to answer. Ah...My first task was to get all the wood out of the bag and let it dry out. I put it out in the sun on my balcony on a cookie sheet a few days after I got home. Based on the fact that it was still wet, it would've been better to get it outside the first day. The bag did not smell too good when I opened it up days later. Ooopsy. But it was all fine. 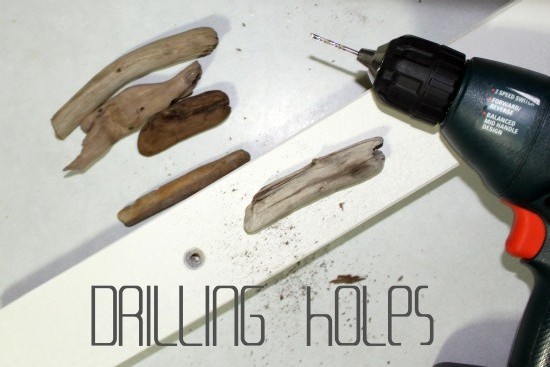 Then I started drilling holes. I chose the smallest bit I had, but in the end actually sized up two more times to get a hole that could easily be threaded with twine. A few of the pieces didn't survive the drill episode, which is to be expected as driftwood can be a bit fragile.

Another man vs. woman thing with this. A man would have let the drill charge completely before starting this project, but I just kept working a few minutes at a time until it died again and then let it charge for a while then came back. I know, this would drive a man insane. Luckily no men were in attendance as I worked this project. 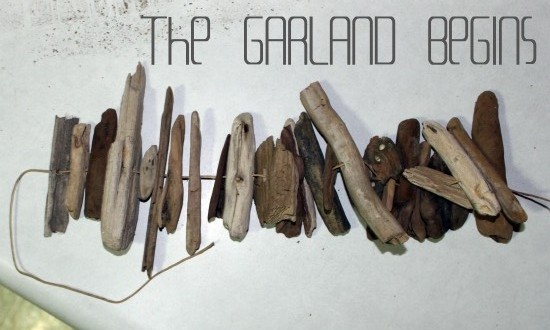 Then I started threading the driftwood onto a piece of jute cord. I thought about using a colored cord, but in the end decided to stay very neutral and basic with everything and let the sea's effect on the wood do the talking.

Hopefully tomorrow I will be able to do a garland reveal. It's getting longer and looking good. I'm hoping it will be long enough for me to hang below the mantle of my fireplace. I can probably fix it up so that it works even if it's a little too short.

So this is the story of making my driftwood garland dreams come true. In the end for the amount of work it took to gather the wood, transport it home, let it dry, drill the holes and thread all the little driftwood pieces, I'm thinking $30 is a pretty great deal for a 6' driftwood garland. I think mine will probably only be 4 to 5 feet long when I run out of wood.

But mine has history and meaning which make it extra special. Hopefully, someday The Man will understand that and appreciate yet another seemingly hair-brained craft scheme. He might as well get used to it, because it's not going to stop. Poor guy. I'm sure the next time I have women over to the house they will coo at my driftwood garland and I will feel share my driftwood DIY enthusiasm and I will be quite happy about that. haa-haa.
Posted by kalanicut at 12:00 AM