Wanted to share with you a quick recap of the updates we made to our kitchen and dining room. When I first looked at our new home online, very early in the year, I overlooked it very quickly. There was a weird, tall, spindly tree growing in the kitchen and two big, gaping planters stretching across the front of the kitchen and fireplace in the dining room. Bleck. 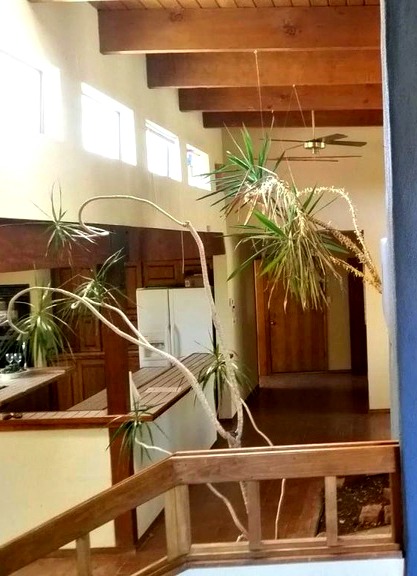 The house needed some major updates and the quirks were a little too weird for me. Months later after looking at hundreds of houses, this house had been taken off the market and put back on the market. The listing for some reason only showed photos of the outside of the house so I did not realize it was the same house until I did further research and found the house listed on Zillow with lots of photos that I recognized having seen earlier in the year. By now we had decided on this exact neighborhood and were only looking for houses in that area. This house, strangely, fit a lot of our criteria and so we decided to take a look at it. The next day we put in an offer.

Once we closed on the house our first agenda point was to remove the planters and extend the brick flooring. One Saturday we just started digging up dirt and cutting down the strange, now dying trees. We each started with new work goggles, gloves and new shovels. In some strange turn of nostalgia, I asked The Man to save the tops of the trees, as he was cutting it all down, because it seemed they could be rooted and replanted. A couple of months later, they are rooted and ready to be replanted. I just need to get planters and soil and pot them. Then we'll find a spot for them in the house. I hope they will make a nice addition to the greenery around the house and remind us of all the progress we've made in that house. 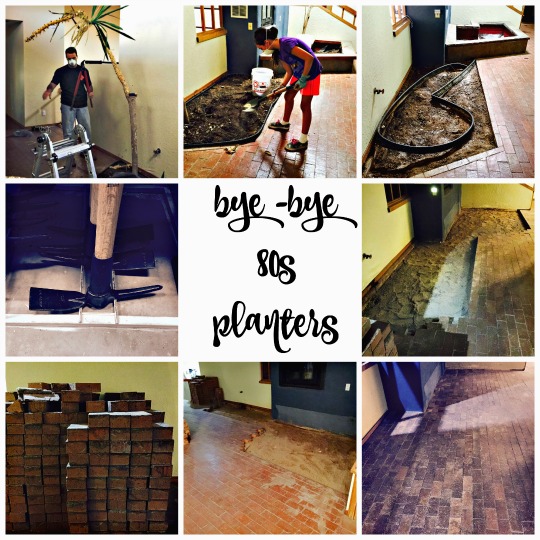 We spent several days tearing up the planters and carrying out dozens of 5-gallon buckets full of dirt and rocks. At this point we turned things over to our contractor who is helping us with small projects. Her team came in and leveled off the ground, removed the brick from the laundry room to fill in the kitchen and dining room floors where the planters had been. It was lovely to see it get done and really increased the size of the two rooms in a nice way.

There was some water damage on the large kitchen wall from the faucet that fed the planters. The contractor's team patched the wall and I found matching paint in the garage and patched up the paint work in the area.

The entire area feels much roomier now and the brick floors turned out nicely. It's interesting that these floors do not have concrete-like mortar to hold them together but rather it's all set in sand. We have a bucket full of sand to continue to fill the spaces as the sand settles a bit during the first few months.

I do love the rustic feel of the brick. It's different, off-beat and old-school. I like how it is not perfect. It's actually quite quirky. The floors are not perfectly even by any means. But the rustic feeling goes with the rest of the brick floor that extends from the garage entryway across the kitchen and dining room.

Our goal is to get a built in seating area of some sort around the base of the fireplace but for right now we have a sofa that we've put along the staircase wall and we might add a chair and small table for the time being. This was a big and pretty expensive project but it was a must right away. I am quite excited to get the wall across from the bar set up with bookcases for cookbooks and pretty dishes and some nice piece of art.

I will share a little bit about organizing the kitchen soon. Things are coming along but it still feels like there is a long way to go. But it's starting to feel more homey each day.
Posted by kalanicut at 12:00 AM No comments: