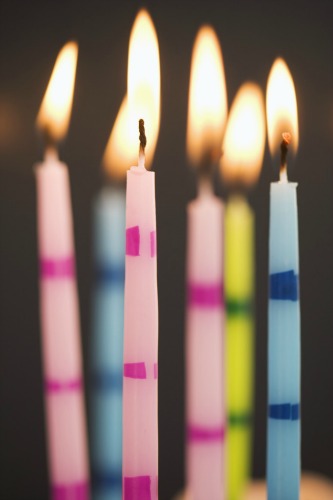 It's been a fun full week celebrating The Bug's birthday. Since her Dad isn't here I decided we would celebrate turning seven for a full week, doing a few small things to celebrate. I'm not big on throwing large birthday parties for a kid's entire school class which is pretty standard here in L.A. I have found that my birthday is happiest for me when it is filled doing things that bring me joy -- with people I love. So we have aimed each year to provide special experiences and give the birthday boy or girl (big or small) the chance to do things they especially love doing on their birthday.

So I talked with The Bug about things she would like to do and then tried to throw in a couple of surprise outings and events. First we went put-put golfing. Since we went on an early out school day we had the place to ourselves. It was fun to see how well she gets put-put golf remembering the first time we took her and how she didn't get what we were doing at all. Now she has a bit of a golf stance and gets the whole idea.

Last Friday night we had double feature movie night in my bed with homemade pizza, cookie dough and cotton candy to snack on and pudding in a cloud for dessert. We watched the Shirley Temple movie Heidi and then The Karate Kid. A couple days later I found her standing on a low wall pretending to do the Crane Kick.

Saturday we went to Kid's Space in Pasadena. It was my first time at Kid's Space but her Dad has taken her a few times and she loves that place. My trip to Pasadena also reminded me of what a super cool city that place is and I am scheming now a date with The Man when he gets back. There are so many beautiful shops and restaurants that I'm sure we could stay entertained for hours.

Sunday night I let her open a special surprise. A handmade photo quilt made for her with pictures of her and her Daddy. This came to us from Operation Kid Comfort a program of Armed Services YMCA San Diego. These quilts are made for children of deployed military members by the San Diego Chapter of the American Sewing Guild. She was so excited to see it and has said again and again how special it is and how it is her very favorite most special present.

Wednesday she opened a present from my very dear aunt. A special handmade pillowcase covered in grizzly bears. She loves animals so she thought this was quite a fantastic gift. We decided we need to buy her a pretty new pillow to put it on.

There have been a few other indulgences throughout the week. Thursday night was the highlight. We spent the afternoon buying her a few new clothes and she got to choose where we went for dinner. At the mall she asked if she could ride the kid's train. I said yes and gave her some money. She paid and rode alone on the train and it was a little bit melancholy for me as I realized how grown up she's gotten and how she's very suddenly not a little kiddo anymore. She got off the train and even though she enjoyed it she said she thought she was getting a little too big for that stuff now. I think it just wasn't as exciting to her as it was when she was younger. If this doesn't illustrate what it means to turn seven I don't know what does. Here we stand at the crossroads of letting go of the things of small childhood and we both feel it. I'm sad to see small childhood go. Next we went and bought our big girl new pants, shoes and a shirt and sweater.

The very best part of our birthday celebration was an across the world Skype birthday party with her Dad on Thursday night. It was so fantastic that he could be with us to open presents, sing happy birthday, blow out candles. Unfortunately there was no way to share the cake, ice cream and hugs with him. But I did take a picture of her with her Dad together via computer. This will be a birthday she will remember so I'm glad we have that special photo.

Along with having the kids at school celebrate her birthday with her, she got a great surprise at karate class. Her teacher for the yellow belt and she passed. She was so excited because she was not expecting to get her yellow belt for a while. She did a great job on her test and it was fun to see her really concentrate and excel when she put her mind to it. Because you know there are those "parent moments" when she's staring at the ceiling, not paying attention at all when I wonder why we're paying money for her to daydream. Anybody with me on that? Haha.

It's been a fun week. I will say I was worn out by the end. Now it's time to start working on Easter and the April birthday care package for The Man. Tomorrow it's another 30-day Home Reorganization Project update. It's Update Four already. Things are looking  much altered in my bedroom now. New lessons learned this week that I will share with you. Have a fantastic day. I am sending you good wishes.
Posted by kalanicut at 12:00 AM

Wow ... I want you to plan my birthday week. What great memories you are creating for your sweet seven year old. This week should be a week to do some of your favorites.