I usually have my desk sign for my word of the year created a few weeks before the new year or at the very least in the first week of the year. This year for some reason after Christmas I had a hard time getting around to some of the smaller errands, one of which would be going to the craft store to get supplies for my sign. 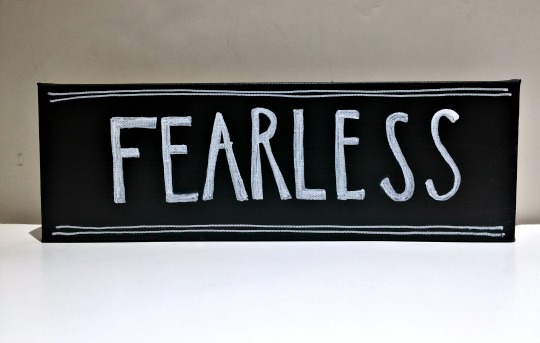 Last week I had two appointments early in the mornings so I decided that on my way home from both appointments I would run a few errands that I'd been wanting to take care of. They were both fun, one was going to the craft store for supplies for my sign and the other was doing some January sales clothing shopping.

My first attempt at my sign was going to be to use a blank white canvas with some colorful, bold sticker letters. They were pretty, with lots of different patterns to choose from, so my sign would be very high energy and bold.

Unfortunately when I got home I realized that some of the letters in the pack were especially wide, much wider than others, particularly the R and S. So when I tried to layout my sign, the canvas was not wide enough to fit all the letters. Ugh.

Disappointed, I decided to take another route. I had purchased some 6" round plain wood pieces, a chalk marker  and chalkboard paint to make new Valentine's Day themed signs for my door baskets. So I decided to also paint my canvas and try a simple but bold chalkboard treatment for my sign instead.

It took about 3 coats of paint to completely cover the canvas and while I was at it I painted all my wood rounds too. I let them dry for a couple of days before I could get back to them. Making this sign was the first time I've ever used a chalk marker. It has the same potential messiness of the metallic markers I like to use...sometimes it can bleed a little too much, etc. But the great thing about the chalk marker is that it's not permanent like the metallic markers. It's easy to clean up and fix mistakes. I made a couple and I just used a damp cotton swab to clean up the errors and straighten up lines.

So my word for the year is fearless. I think it applies to my life in a variety of ways, but one of the things I've regretted in the past is not asking enough questions, not asking for what I want and not asking for help. I think all those things happened because I was afraid to ask. So I want to be bold this year in telling people what my goals are, asking for their help, not being afraid to trust my instincts and to be bold in my attempts at everything I do. I don't want to be afraid to just for what I want, need or think might be exciting. Because it really is true that you can and should ask for help in getting what you think you want. Even if it doesn't work out exactly like you expected you are always ahead of where you started.

This year, I'm working on several new ventures and I need to be bold. I have this little sign by my desk to remind me of what I need to do. It now joins Shine and Simplicity, my previous words of the year, in reminding me to live courageously, stay focused, keep it simple and let my light shine. Fun stuff! I'll be interested to see how the word fearless plays out in my life in 2017! Whatever happens, the goal is that all my decisions will be run through the FEARLESS filter before I choose a direction to go.

Do you have a word of the year? I'd love to hear about it in the comments. You always inspire me.
Posted by kalanicut at 12:00 AM