Yay! I Survived The First 20 Days of January!

Well I can't tell you how happy I am to see that we are 20 days into January 2017. Here's why. For some reason during most of the previous five years I have had major tumult happening in the beginning of January EVERY year and all of it unexpected. So I am absolutely celebrating that we are at the 20th of January and my life has been calm, cool, peaceful and uneventful. 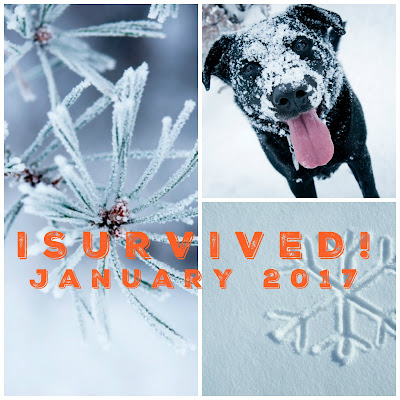 To give you an example of what has been happening in past years, here are just a few of the January surprises I/we have experienced. All of these events happened in the first three weeks of January.

In 2011, I had my potentially fatal mastoiditis infection and hospitalization. That lead to six months of hearing loss in my left ear and some other challenges that were very challenging to deal with. Learning to live without the gift of hearing is chock full of some difficult lessons. It is scary to have someone or a car come up behind you when you can't hear anything coming!

In 2013, we got married while The Man was home for two weeks R and R, got custody of his daughter and she came to live with me while he went back to the war. That was a tough day when we sent him back for six five more months and I became a full-time stepmom by myself.

In 2015, with two weeks notice, we uprooted our family and I moved to New Mexico for an exciting new job while The Man and Kiddo moved to San Diego and we lived apart and I commuted on weekends to California for 8 months. Every weekend in January I flew home to pack up our house. That part was awful.

In 2016, I broke my foot in five places and ended up in a cast until May. Still recovering from this doozy. After lots of therapy and such, my latest blessing is yoga, which has really been helping me recover my balance and stability on my feet. I think it's also got to be helping some with swelling in my foot and ankle too, getting the blood and energy flowing throughout the body.

Given all that there's no doubt that this year I was feeling a little nervous about facing the beginning of January again. But I am a little more confident that the first month of this year may be without incident and we are all healthy and well. Looking back I am also recognizing again the blessings that came from all those experiences, even though they were beyond challenging. Even though some of the events were great, great things -- there were also some very difficult pills to swallow with each big change and quite a bit of acute stress at the time.

So here's to 2017, may she be a great one. Monday I'll share with you my word for the year. It actually ties in quite nicely with the theme of this post. If you have a theme word for 2017 I'd love to hear it if you want to share it in the comments.
Posted by kalanicut at 12:00 AM