What Happens When Someone Steals Your Identity On Twitter

I thought I would share with you what has been happening since I found a copycat kalanicut account on Twitter. I happened to do a search for kalanicut from one of my other twitter accounts and two users came up. That was a surprise. Here's a look at my actual account on the left and the bogus account on the right. 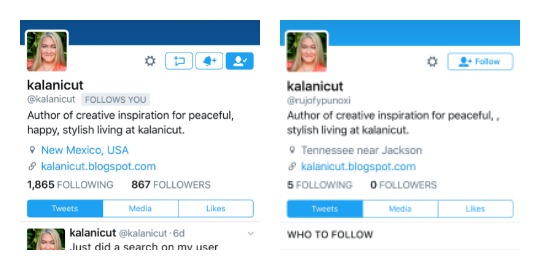 I was pretty miffed to say the least, to find my headshot, business name, bio and blog address cloned onto this other account. In case this is already happening or might happen to you in the future I thought I'd share what has been going on since I first found out.

First I did a quick google search to find out the best way to handle complaints to Twitter. Then I followed the instructions to file a complaint with Twitter. They got back to me within 24 hours and while I was hoping they would just look at their records, see that I'd had my account since 2009 and push forward to shut down the other account, that isn't what happened.

As is so frequently the case now, proving who I am became an assignment and work I had to do. Doesn't it seem like it should be the other party who gets the questioning and has to go to work to defend themselves, rather than the victim?!

I will say, as if you can't tell, I was annoyed at first but once I got started it only took me about 30 minutes to write a statement, take photos and send copies of my photo ID and business card to Twitter. I included photos of both Twitter accounts, details on how long I'd belonged to Twitter, and a link to my website where they could find further proof of who I am and my brand, which I own the rights to.

It was pretty easy to upload these documents to Twitter's secure server, although it was a little annoying that you had to do them one at a time. That seems a little old-fashioned and slow in a world where we've been able to grab and upload multiple files for at least a couple of decades.

So now I'm waiting to hear back from Twitter on what will happen next. I'm really hoping this won't be a long drawn out process. I feel it should be fairly easy for them to prove who I am and prove that the other account is bogus. Fingers crossed.

*Update 1/22: It looks like things are finally straightened out and I have access to my Twitter account again. The annoying thing is now I am getting "thanks for following me" messages from every person I've followed that sends those out. So a ton of people think I've just followed them, when I've been following them for years. That will end at some point thank goodness. But I'm glad that (hopefully) things have evened out and are back as they should be.
Posted by kalanicut at 12:00 AM