Wednesday night I left my office, ready to head for home and took a little crazy spill in the parking garage. I got up and was a little shaken up. My hands, wrists, knees and especially my left foot hurt. I took a minute and just stood up against a pillar in the garage to get my bearings. I was a little shaken up but my car was close so I slowly walked over and got in even slower.

Luckily it was my left foot that seemed to have taken the brunt of it, so I could still drive. But by the time I got on the freeway a few minutes later I was quite certain that I needed to get medical attention. While my body hurt pretty much everywhere, my left foot was SCREAMING. I had no idea where to go and don't have a primary doctor here in town yet. So I called a friend and asked if she knew where an urgent care was in our neighborhood. 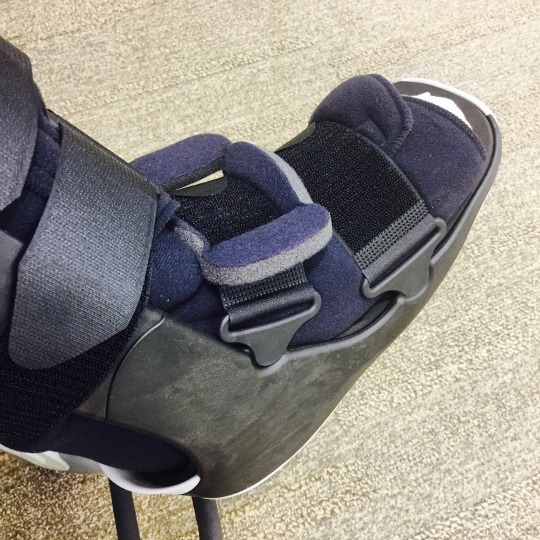 When I got off the phone with her I called my husband and asked him to meet me at the urgent care just behind our regular grocery store. He was close by and he pulled in just as I turned off my ignition in the parking lot. He got a wheelchair from inside and I tried to stand up on my leg and it was a 100% no go. So in the wheelchair I went and stayed for the next two hours until I came out of urgent care with pictures of my Jackson Fracture of my fifth metatarsal. In layman's terms, a complete break of the farthest left long bone in my foot. I also was the proud owner of a temporary fiberglass half-cast, a lot of ace bandage and crutches.

By that time I was also exhausted so getting in my husband's care we drove home leaving my car in the parking lot of urgent care. We got me into bed and thanks to a painkiller shot urgent care gave me, I felt pretty good until morning although I couldn't really sleep and was a little traumatized about what more we would find out in the morning. The doctor at urgent care wasn't sure I just had the one break but that there might be another area with problems. That was a little unnerving.

So while not sleeping and probably totally hyped up on stress adrenaline, I started googling "How to survive a broken foot" and quickly realized there was tons of good information on Pinterest, a bit of a surprise. In minutes I had started a new board Life With A Broken Foot and was pinning great ideas for basic cast life survival, workouts you can do in a leg cast and more. It was good I read a couple of articles from women who shared their wisdom because they gave me a very realistic picture of what I was about to go through and they also gave me some great hope and inspiration. In addition I got some great tips on how to shower, how to get up and down stairs and what foods are good to eat while trying to heal broken bones. Another important realization came when I read about how I would need a leg cast wardrobe. I realized none of my pants would work with a cast and it's way too cold for skirts. I would need clothes I could pull over the top generally.

The next morning I had to call for an appointment with the osteopathic quick clinic in town who take urgent cases. At 8:15 AM I got a 9:45 appointment and quickly learned that getting out the door will now take about three times longer than normal and I will generally be totally sweaty and exhausted by the time I change my clothes, brush my teeth and hair, get shoes on and crawl down two flights of stairs to the garage.

The quick clinic confirmed the one complete break with no other issues, thankfully. They offered me two options: surgery or no surgery with the possibility of surgery later if it doesn't heal quickly enough or properly. I went with the no surgery option which my team of professionals completely supported. So we will revisit this in two weeks.

I was lucky enough to get a boot instead of a cast, at least at this point, so I can take it off to shower and adjust it and take care of my skin on my leg so it doesn't get all itchy and gross inside. The other great blessing in all this was that it was my left leg, so I can still drive. That would've been a nightmare since the bad news of the whole situation was that my foot needs to be "no weight bearing" for three full months. That's a LONG time! A crazy long time. When I figured out that it would be April and how far that is away is I think that was the real low point for me.

We spent the rest of the day working on getting things started for me to get a knee scooter (insurance, insurance insurance), going to the DMV for a handicap placard (I would already be dead in the water if I hadn't gotten that!) and pharmacy prescription.

It's amazing how many cast "life hacks" you learn in a very short period of time. I have figured out how to get dressed, sponge bath, get around the house, how to be able to cook in the kitchen, the importance of having a chair to sit in close all the time and how badly all your bones hurt on crutches and when you using one leg to bear all your weight. I should be getting the little knee scooter early this week. Yay. I think having options is good.

Friday I had to go into the office for part of the day to do monthly reports and take care final delivery on several projects. It was actually great because coworkers grabbed my desk chair and brought it out front and then I just sat and pushed myself around the office with my good foot all afternoon. I only had to stand up for a few short minutes to hit the ladies room. I realized how totally awesome "handicap accessible" is for people like me. Being able to move through wide doorways and halls and have handicap accessible bathroom stalls and kitchen sinks was such a huge help. I joked I might just live in the office for the next three months and sleep on my couch. But it's great to know things at work won't be difficult physically. I can always order lunch in if I don't want to leave the office.

Saturday I called my hair salon and asked for a wash and a blowout. Sleep is tough to come by in a cast. So far I've had two stints where I've slept at least 5 hours straight but I have also had nights where I was up and in intense pain or just waking up every 45 minutes. So there's no guarantee of good rest. As tired as I get just cleaning up and and changing my clothes there was no way I wanted to attempt to wash my almost waist length hair. And the idea of leaning back in a shampoo bowl at the salon sounded so much easier. It was great and the most relaxed I had been all week. I may do this every week until I get my cast off. We'll see how it goes.

The next big thing I needed to do was go shopping for some cast-fashionista clothes. This would have to happen at stores that had motorized shopping carts, which immediately gave me two options I could think of. So my sweet husband, who has been taking such good care of me, and our kiddo helped me to the store where I bought several versions of black knit pants, leggings and some comfy sweats for around the house.

I also got a couple of baggy shirts, sweaters and sweatshirts...I've already learned that crutches totally mess your tops up and they get all twisted and ride up. So something long keep me modest was a nice addition too. I just feel cold a lot and it's nice to be able to bundle. I didn't have quite enough warm clothes and had intended to buy a few things during the after holiday sales which didn't happen. So adding a few warmer tops was important to do. Of course the one time I don't feel cold is when I get ready to leave the house which is when I am totally soaked in sweat from the effort of getting ready and crawling down all the stairs to the car.


The biggest challenge of the shopping experience was driving the motorized shopping cart. I learned quickly that it's all about driving aggressively if you want to make any progress and not crash into stuff. That seems a little counter-intuitive but the slower you go the harder it is to turn. And reverse is completely humiliating as it beeps loudly throughout the area! Handicap accessible took on a whole new meaning as I tried to get things off racks on high and low shelves. Challenging! I never did make it down the lotion aisle because there was a big pillar that seemed to make it impossible to drive the scooter down it. Frustrating.

Everything I've experienced this past four days has made me much more aware of people on crutches and the challenges of people with physical disabilities for sure. It's interesting how challenges can either make us bitter, numb or more compassionate towards others.

I have several friends here who have offered assistance and I am trying to say yes instead of "Oh, I'm okay." This quick change of events has definitely amped up my need to focus on simplicity. There will be nothing but through the summer as I heal. It does put a bit of a crimp in my workouts although I've decided I will just have to work on upper body and again there are all those workout ideas on Pinterest. I also won't be skiing this year - an epic ski season in the making - darn it! I am going to try to let people help me because that is how you make great friends. Some ladies are going to come over this weekend to help take down our Christmas decorations which is both sweet and awesome.

When I get feeling better I'll try to pull together some useful posts of cast fashion or a resource of good survival tips. If you're interested, you can check out my Life With A Broken Foot (or cast) board on Pinterest.
Posted by kalanicut at 12:00 AM